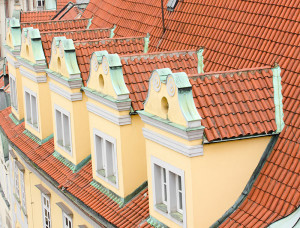 A long time ago, before the Czech Republic joined the EU, and at a time when the Czech economy was undergoing huge changes, investors were not that much interested in this developing country which was trying to slowly reach out to Western Europe. At the time, properties in Prague were available at bargain prices. Today, the story is quite different. Anyone looking for an overpriced two or three bedroom roof-top apartment in a neoclassical or restored art deco building in Central Prague with beautiful wood floors, exposed brick, and Italian décor has a lot to choose from – this is the Prague real estate market of today. Flats are increasingly exceeding locals’ budgets, and owners aren’t selling but rather hiking up prices and renting to foreigners willing to pay higher prices to live in centrally located, historic areas.

The luxury real estate boom prior to the recent financial crisis has left a lot of vacant apartments in Prague at prices that no one can really afford, and most investors who don’t want to lower the cost. Still, analysts and rating agencies predict the Czech Republic’s economy is one of the few in central Europe to hold steady, largely due to the relative currency strength. This means real estate isn’t considered a poor investment from the long-term perspective, but you may just have a difficult time finding a reasonable priced place. Until the third quarter of 2008, there was regular growth of property prices, but then rates started to slightly decrease. Ironically, buyers who bought properties in the first half of 2008 might experience a short-term loss of up to 25% of investment compared to today’s prices. In the last quarter of 2011 prices remained almost static. Rates for home rentals stayed at the same level in most areas, and changes up or down were insignificant in recent years.

Recently, according to analysts, commercial and retail properties are reportedly doing OK. And as fewer owners sell, more and more people rent. It’s possible to purchase real estate as a foreigner in the Czech Republic with varying degrees of difficulty, depending on your residence status and nationality. For EU nationals there aren’t any problems purchasing properties in Prague. In some cases, banks may even lend up to 100 percent of the purchase price, but at a much higher interest rate (this is subject to your financial status and location of the property).

Properties which are located close to the Metro or tram stops are in the highest demand. Other properties in demand are family houses with convenient locations, within reach of public transportation or easily accessible by car.

As a price guide, central Prague’s districts  are the most  expensive, including Prague 1 and Prague 2, followed by the residential district of Prague 6 and some parts of Prague 5. Less popular for rent are central areas with residential restricted parking zones, where a special permit is required for parking. The lowest demand is for large apartments exceeding 120 square metres. Prices per square metre can vary significantly from 25,000 CZK in Prague’s outskirts for an old flat to 120,000 in some luxury central prominent areas, with average prices around 45,000 to 65,000 per square metre.

For more detailed information, read our articles on renting, buying, and home repairs, which will help you get a foot in the door of the perplexing world of home ownership and tenants’ rights from abroad.